Sci-Fi Journeys: Where They Start and Land 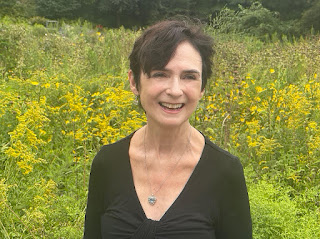 Today I’m extremely excited to share an interview with one of my favorite writers (and former college roommate) Janet Stilson. Janet writes stories in the sci-fi and fantasy genres that illuminate conditions that are present in the world today. Among her feature film scripts is JAGUAR TRAIL, a story of suspense shot through with a climate change theme. It won the competition for the Writer's Lab for Women, sponsored by Meryl Streep and Nicole Kidman. It was also selected by Stowe Story Labs.

Another feature film script, IMAGINARY CHILDREN, is adapted from Janet’s own short story of the same name. It was published by Asimov’s. The esteemed sci-fi literary magazine also featured Janet’s narration of the story in a podcast episode.

IMAGINARY CHLDREN is also based on a portion of Janet’s novel, THE JUICE, which envisions what media companies might be like decades into the future and the people who roam their corridors. It was published by Dragon Moon Press in February 2021. Janet has studied media companies deeply as a journalist over many years. Her articles have appeared in many fine publications--and that’s where our interview begins.

1.      While the years I’ve known you have proved you can write just about anything, it seems to me the genre that attracts you most (at least lately) is science fiction. Or has it always been the case? Either way, what is it about science fiction that calls you? I've gravitated to sci-fi in the more recent past as a direct result of my other life as a journalist. As a reporter and editor, I specialize in the media business. Over the years, I've had a number of conversations with media executives about where their business is headed -- the upcoming shows that they're debuting, the technology that they're going to be introducing, and other new ways they are making money.

I've been programmed, by that work, to question what the future will be like. And it's absolutely fascinating. I love seeing what others envision in their sci-fi.

2.     The Juice offers an exceptional mirror into the divide between rich and poor and how it is growing, not only in our country but around the world. Have things gotten better or worse, in your view, since The Juice was published? The Juice” was published about a year and a half ago. And more recently, I do see reason for hope, that there is enough momentum, among people, for a less racially, sexually and economically divided world. But I also see such deep chasms between the haves and have nots. The ability for people to get unbiased information from news sources within local communities and on a national and international basis is becoming more difficult. And that condition exacerbates the divide. I think democracy is in a very, very vulnerable state right now. And I'm immensely grateful to the legions of people are pushing back against that.

3.     Would you agree that science fiction is a political art and if so, how does it lend itself to politics? Or can it be completely apolitical as well? I definitely think that it can be apolitical. The sci-fi stories that I gravitate to the most are grounded in issues that are present in the world today, but they can be at a very human level and have little to do with politics—only tangentially.

Can you share what seeded The Juice for you? What propelled you to start writing it? That relates to my work as a journalist, and all those conversations about the future. It got me thinking about what media organizations are going to be like a few decades into the future. How they will entertain us? How might they influence the way we behave, our opinions, and the information that we receive -- even more than they already do today? “The Juice,” isn't an indictment of the entertainment and news industry. It's full of people involved in media who are well-intentioned, or funny, or who have heart -- and some who are not so savory. So this isn't a book that's entirely dark and foreboding. I like to think of it as a roller coaster ride.

4.     Have you ever thought of science fiction as a close relative to horror? To me, it can share some pretty frightening visions of the future. Have you ever had a vision for a science fiction book that could also be a horror story? I absolutely think that sci-fi and horror are connected, and the blending of the two genres can be riveting. There is a version of a subplot within “The Juice” that I played around with in the horror genre in film script form, so I know that it could definitely go in that direction if I had chosen to do it in the novel. And I wouldn't be surprised if I get more into the horror genre moving forward.

5.     My favorite writers keep me reading long past the time when I should have stopped—especially when I’m trying to get to sleep. Who are two of your favorites and why? I'm a big fan of Kazuo Ishiguro, who wrote “Never Let Me Go” as well as “Klara and the Sun,” among other books. I so admire his ability to write achingly poignant stories that don't involve huge sci-fi worlds, when he's writing in that genre. I'm also immensely impressed by Neil Gaiman. His imagination is just extraordinary. I just finished “American Gods” and the sequel novel “Anansi Boys.” And I had to immediately turn around and start reading them again!

6.     So many people say reading is a lost art, no one reads anymore, and reading has been supplanted by TV and movies. Do you agree, or do you still think books play an important role in our society? If so, what do books give us that other art forms do not? I think that book reading is very much alive. There are very rich and vibrant communities of book lovers on social media. And I'm pleased to have captured some of their attention. But I haven't researched the number of avid readers today versus whatever the number was 10 or 20 years ago. So that's just my seat of the pants observation. Also, Hollywood is obsessed with original intellectual property (IP). They need novels and short stories in order to make TV shows and films. So, there's that element to consider as well.

7.     Are you working on anything new? If so, can you share anything about it with us?

Right now, I'm working on a sequel novel to “The Juice” that I'm having a lot of fun with. I can't tell you a lot about it at this juncture, because I'm still laying down the paint, so to speak. But I'm very excited about it and can't wait for you to read it! Thank you for allowing me to share some of my thoughts.

Please be courteous and please do not post ads for your business on this blog.